The Geology of Fukushima

At a time when everyone is wondering where the coriums of the crippled Fukushima Daiichi nuclear plant may be, it is interesting to know the nature of the terrain where they could possibly be hiding. Although all documents used to write this article are readily available, most are in Japanese and this explains that to date knowledge of the geology of Fukushima is fragmented. Based on the geological survey that was conducted prior to building the plant, as well as on results of seismic testing and recent research related to drilling, this article will attempt to give an updated picture of the nature of the substratum of the nuclear plant, which may help to predict possible developments in the currently unfolding disaster.

The Fukushima Daiichi Power Station is located on the east coast of Honshu island, in northeastern Japan, on a Cenozoic sedimentary ground, i.e. belonging to the current geological era (from 65.5 million years ago to the present). It is separated from the Abukuma granite plateau by the Futuba fault. This map was produced when a 1005 meter-deep drilling operation was carried out in an area situated a dozen kilometers south of the Fukushima Daiichi plant, close to the Fukushima Daini plant. Published in 2010, it is the latest that we can rely on to learn about the overall geological context of the crippled plant.

Coring conducted by researchers shows that the layer of sedimentary rock which makes up the soil of the east coast of Japan over at least a hundred kilometers has a thickness of 815 meters at the latitude of Fukushima Daini.

For more detailed information on the geology of the soil of the Fukushima Daiichi plant, the following three other documents are essential references: the first is the geological survey that was conducted prior to the construction of the plant (1967); the second is a safety assessment in terms of seismic risk of the nuclear site, published by Tepco in May 2009; the third is an expert appraisal summarizing the situation of the Fukushima Daiichi plant from a geological and seismical perspective, which was published by the Japanese authority for nuclear safety, the NSC (Nuclear Safety Commission), in June 2010.

The first paper brings together two cross-sections of the ground at the site of the future plant: one east-west, another north-south. Based on this document, backed by a photo of the site before construction (1966), we realize that the coast was originally rocky and that the sedimentary plateau has been excavated in order to achieve the earthwork for the construction of the nuclear plant. As anticipated in the cross-section (marked by the dotted red line), the excavation lowers the ground to 10 meters above the sea and the digging of the basement is below sea level. Geological study of the Fukushima Daiichi site before 1967 (Cross-sections colorized and annotated in French by the author from an original Japanese document in black and white. Source: http://cryptome.org/0004/daiichi-build-01.pdf, page 103) The site before construction, in 1966

In order to build the plant - originally only Unit 1 - the upper sedimentary layers were excavated. These are Quaternary alluvial deposits composed of clay and sand which are friable or semi-hard (green and brown in the cross-section). Thus the plant was built on "mudrock" type sedimentary rock (yellow in the cross-section), which is a muddy rock composed of clay and silt (very fine sand). But the term "muddy" does not mean that the rock is soft. It simply means that it is a rock whose matrix is clay; it is also called "argillite".

The second report examines the response from the ground to waves emitted from the surface over the entire site, particularly under the common cooling pool, which is located west of Unit 4. This pool, designed to cool more than 1000 tons of spent fuel, was the subject of particular attention: the east-west and north-south cross-sections intersect at this precise location. Map of the site

with location of the cross-section below 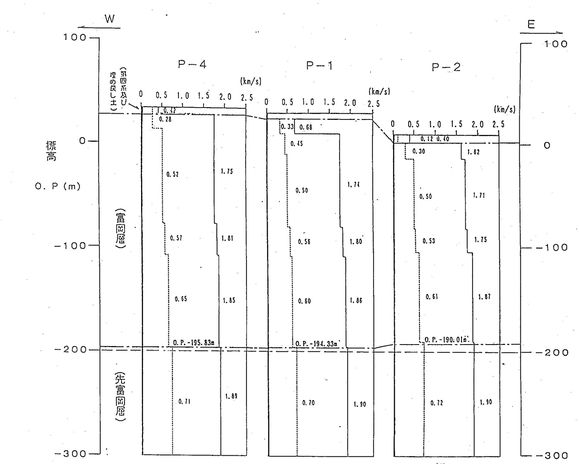 This cross-section shows a ground discontinuity at a depth of around 200 m, corresponding to a change in the nature of the rock. Between ground level and  -200 m, we find the geological layer of Tomioka, dating from the Neogene; the layer below it is older, it is labeled as belonging to the Paleogene - Neogene and corresponds to the Taga layer.

The third paper presents a detailed analysis, also shown in two cross-sections, of the various geological strata inside this thick Cenozoic sedimentary coating. This is the list of the main strata, identified by letters, from the closest to the surface ground, down to the deepest. It is followed by maps, cross-sections and an analytical table:

- T2: sandstone with some inclusion of tuff (Tomioka layer, Neogene) of the two cross-sections East-West cross-section (location of the plant added in red)

North-South cross-section (location of the plant added in red)

Analytical table: Stratigraphic geology of the site of Fukushima Daiichi. (Table made from an original document in Japanese. Thanks to Marielle for her help.)

In several of these cross-sections, an ancient fault, predating the later Miocene, is clearly visible under the nuclear site. Whereas the geological survey conducted prior to the construction of the plant does not reveal this fault (drilling did not go beyond a depth of 200 meters at the time), it is clear from the documents dated 2009 and 2010 that Tepco and the NSC have known about it for several years. The following cross-section shows this fault with even greater depth (- 1300 m): There is obviously a need to reconsider the way authorizations are granted for the building of nuclear plants (1). A non active fault behaves like a dormant volcano: once a seismic or volcanic event is known to have occurred even in a very remote past, it has the ability to recur if the conditions are met again. It would not be surprising if, during the earthquake of March 11, 2011, this fault had been reactivated, causing severe damage to the plant, such as this crack discovered after the quake: Permeability of the layers

Andreas Küppers, a German geologist who had intervened on the site during the construction of the plant, was interviewed in March 2011 by the newspaper Die Welt. According to this specialist from the GeoSearch Center Potsdam (GFZ Deutsches GeoForschungsZentrum), the different layers of argillite on which the plant is built are likely to be waterproof and should be able to prevent contact with groundwater (2). But this opinion is not shared by everyone. One dissenting Japanese geologist, for example,  - who wishes to remain anonymous -  has been noted for his views expressed on a U.S. forum, "Physics Forum": according to him, the bedrock of the region is made of coarse, very permeable sandstones, and contains vast amounts of water from the neighboring Abukuma mountain. This groundwater, he claims, is flowing under the plain towards the sea at a very low speed of about 50 cm / day (3).

In fact, in light of the collected data, it seems that the views of these two geologists may not be conflicting after all, because both types of layers do exist: argillite (or silt) and sandstone. However, Andreas Küppers, in line with Tepco's style of communicating, refrains from disclosing all the information he possesses: namely, that there is not only waterproof argillite, there are also some strata of permeable sandstone, which allows groundwater to move towards the sea. Moreover, the presence of this fault under the plant makes it possible for the water to sink down vertically without being stopped by a horizontal waterproof layer of argillite, and allows connection between several sheets of groundwater which one would have thought were independent.

The good news is that the radioactive water leaking from the plant will not be able to spread towards the Japanese inland and the Abukuma plateau due to the downward slope of the geological layers. The bad news is that there exists a fault which appears to be active right under the Fukushima Daiichi plant itself: this allows, and will continue to allow, radioactive pollution of aquifers over a depth of several hundreds of meters, as it runs through the different "waterproof" strata (4). This also means that the radionuclides will naturally be carried towards the sea by this underground water stream flowing through the permeable layers of sandstone. Sandstone is indeed the ideal rock for aquifers, as it is both permeable and fractured, providing easy movement of water. And finally, there is the problem of the type of rock on which the plant was built being rather "soft", meaning that an earthquake can only destabilize the buildings.

As early as March 31, 2011, Tepco announced that the groundwater was contaminated with radioactive iodine, according to an analysis of a sample taken at a depth of 15 meters under the first reactor (link). Today, if one or more coriums have sunk into the ground, this pollution has very likely been increasing. But Tepco no longer shares any information about the pollution of groundwater. Their only concern is to present a beautiful reassuring façade, which will never solve this disastrous pollution of soil and groundwater: underground contamination is irreparable, because there is no access to it.

(1) In France, unfortunately, the situation is no better: the nuclear safety authority seems to have expressed no objections to the expert appraisal conducted by EDF, which appears to have falsified data pertaining to seismic hazard for several nuclear plants out of concern for profitability.

Source documents may be consulted at: http://observ.nucleaire.free.fr/falsification.htm

(3) This information on the origin and direction of water flow is confirmed by the first cross-section in this article: the general downward slope of Quaternary strata goes from the mountain to the coast.

(4) Yesterday again, Tepco was pretending to have no knowledge of the fault over which the plant is built, and was trying to divert attention by discussing some active faults located 50 km from the site! Link to this bulletin from NHK: http://www.scoop.it/t/tsunami-japon/p/412878168/eng-tepco-decouvre-des-failles-probablement-actives-pres-de-fukushima-nhk-world-english. Link to a video from JAMSTEC that shows a recently discovered active fault on the seabed off the coast of Fukushima: http://www.youtube.com/watch?v=ZAidW9t6f9Q&feature=player_embedded!

The following sources were consulted when writing this article:

Different geological layers in the region of Fukushima:

Article on the northeast coast of Japan: